Two of the largest islands in the Mediterranean Sea belong to Italy, but the country counts a great number of other smaller islands. Actually about 1/6 of the total territory of Italy is insular.

So, how many islands exactly does Italy count alltogether? The total number of Italian islands is over 450, with about 350 sea islands (including 13 archipelagos), about 100 lagoon and lake islands and a few river islands (like the Isola Tiberina on the Tiber, Rome). Venice alone counts 32 inhabited lagoon islands.

Nearly every region of Italy has its islands, except three: Abruzzo, Molise and Marche, even though they are bordered by sea.  Then again, Umbria, which has no coast-line, still has islands, though river islands. About 1/10 of the total population lives in the insular part of Italy, making insular Italy one of the least populated macro-regions of Italy. 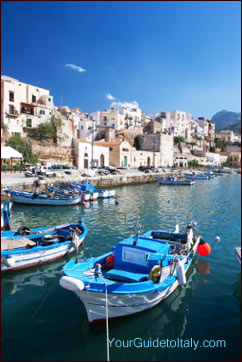 La Pelosa is one of the most beautiful beaches of Sardinia. Many consider it one of the most attractive places in Italy - and not just in Italy- for the beauty of the sea. Its cyan colored, transparent waters together with the very fine white sand make it look like a tropical beach rather than a mediterranean one. 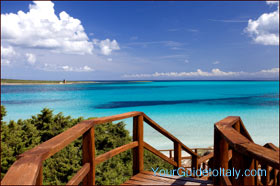 Sicily is the largest island in the Mediterranean and also the largest of the Italian islands. The Aegadian Islands, Aeolian Islands, Pantelleria, and Lampedusa are also part of the autonomous region of Sicly. Famous sights in Sicily include the Valley of the Temples (Agrigento), the Roman villa, the capital Palermo and the impressive Mount Etna.
See also: Sicily

The famous island in the Bay of Naples, off the Sorrento Peninsula, in the Campania region.

The biggest of the Flegrean archipelago in the Bay of Naples, renowned for its thermal springs and therapeutic mud baths. 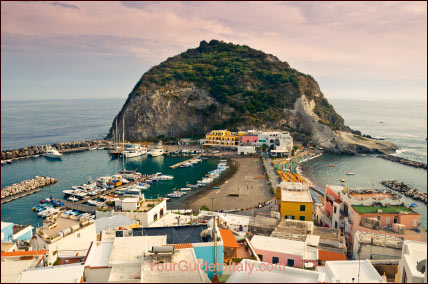 Procida and the Phlegrean islands

Procida and its satellite island of Vivara are part of the Phlegrean archipelago together with the volcanic islet of Nisida. Ischia and Capri are part of the same archipelago. Procida is situated between cape Miseno and Ischia Island. The Phelgrean islands are also known as the Campane islands. See: Capri, Ischia and Procida. 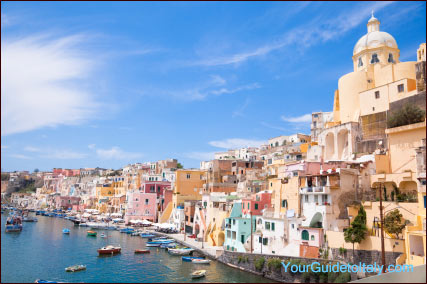 Isola del Giglio is an island located in the Tyrrhenian Sea, off the coast of Tuscany, part of the Province of Grosseto.

Palmaria, Tino and Tinetto form an archipelago of three closely spaced islands situated in the Ligurian Sea, at the westernmost end of the Gulf of La Spezia, jutting out south from the mainland at Portovenere, Liguria. The largest of the three, Palmaria, lies to the north and the tiny Tinetto to the south.


Ponza and the Pontine islands

One of the best-kept-secrets of Italy, Ponza is a volcanic island lying beyond the Gulf of Gaeta, in the Lazio region. While it is relatively unknown among many seasoned Italy travellers and even Italians, it is a favorite summer escape for both nature lovers, divers and the bella gente of Rome and Naples. The archipelago is the result of volcanic activity and has been inhabited for thousands of years. Read more: Ponza and the Pontine islands.

Lipari is the largest of the Aeolian islands (or Lipari islands), a volcanic archipelago situated between Vesuvius and Etna. They are so called because Aeolus, the God of the Winds, was supposed to live there according to the ancients. Lipari, the largest island in the archipelago is formed of volcanic rock.


Elba and the Tuscan archipelago

Elba is the largest island of the Tuscan Archipelago and the third largest island in Italy after Sicily and Sardinia. Apart from Elba the archipelago contains the islands of Gorgona, Capraia, Pianosa, Montecristo, Giglio, and Giannutri; all of which are protected as part of the Tuscan Archipelago National Park. The archipelago is located between the Tyrrhenian Sea and Ligurian Sea, about 50 kilometres (30 mi) east of the French island of Corsica.


Lampedusa and the Pelagie islands

Lampedusa is the largest of the Pelagie islands, three small islands including also Linosa, and Lampione, located in the Mediterranean Sea between Malta and Tunisia, south of Sicily, but closer to the African continent than to Italy. The Pelagie islands are part of the Agrigento province in the Sicily region.

Pantelleria is an Italian island and the largest volcanic satellite island of Sicily, in the Mediterranean east off the Tunisian coast. Administratively Pantelleria is a comune belonging to the Sicilian province of Trapani.

The Maddalena Archipelago is a group of islands in the Straits of Bonifacio between Corsica and north-eastern Sardinia. It consists of seven main islands and numerous other small islets. The largest island is Isola Maddalena, on which sits the archipelago's largest town, La Maddalena. The other six islands, in order of size, are: Caprera, Spargi, Santo Stefano, Santa Maria, Budelli and Razzoli. Only Maddalena, Caprera and S. Stefano are inhabited.

Isola Bella, also referred to as The Pearl of the Ionian Sea, is a small island within a small bay near Taormina, Sicily.  It was a private property until 1990, when it was bought by the Region of Sicily and made a nature reserve, administrated by the Italian branch of the World Wide Fund for Nature. A narrow path often connects the island to the mainland beach. The island has a small and rather rocky beach which is a popular destination for sunbathers.


Favignana and the Aegadian islands

Favignana is located between Trapani and Marsala. The Aegadian archipelago further includes Levanzo, Marettimo, and two islets, Formica and Maraone, lying between Levanzo and Sicily.

The Tremiti islands are an archipelago in the Adriatic Sea, north of the Gargano Peninsula. The archipelago consists of:

- San Domino, the island with the only sand beach in the archipelago and the most developed one for tourism.
- San Nicola is the most populated one. The island is named after a monk named Nicolò who was buried in the island's monatery.
- and the three uninhabited islands Capraia (or Capperaia), Cretaccio and the islet Pianosa.

The Borromean Islands, Laggo Maggiore
The Isole Borromee, as they are called in Italian, are a group of three small islands (Isola Bella, Isola Madre, Isola dei Pescatore or Isola Superiore) and two islets (San Giovanni, Malghera) in the Italian part of Lago Maggiore. Although totalling just 50 acres (20 hectares) in area, they are a major local tourist attraction for their picturesque setting. They derive their name from the Borromeo family who started acquiring them in the early 16th century (Isola Madre) and still owns some of them (Isola Madre, Bella, San Giovanni) today. 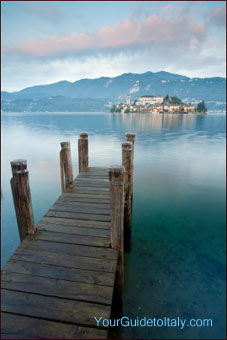