The current Italian generation of artists includes names such as Bettarini, Anselmi, etc.

Music has always played an important role in Italian culture. Many music instruments and music terms were invented in Italy. The art of Opera was born in Italy and many of the existing classical music forms can trace their roots back to innovations of sixteenth and seventeenth century Italian music (such as the symphony, concerto, and sonata ).

Italy's most famous composers include the Renaissance composers Palestrina and Monteverdi, the Baroque composers Alessandro Scarlatti, Corelli and Vivaldi the Classical composers Paganini and Rossini, and the Romantic composers Verdi and Puccini. Modern Italian composers such as Berio and Nono proved significant in the development of experimental and electronic music.

The first literary expression in Italian was the Canticles of the Creatures by St Francis of Assisi who, for the first time, wrote in the vernacular language instead of Latin. Authors like Dante Alighieri, Petrarch and Boccaccio, who all wrote in their native Tuscan, gave the first impulse towards a unified, standard Italian language. Dante's Divina Commedia is considered one of the literary masterworks produced in Europe during the Middle Ages. Other important literary figures include: Giacomo Leopardi, Vittorio d'Annunzio, Alessandro Manzoni, Tasso, Ludovico Ariosto and Ugo Foscolo, who has been compared to Goethe for his novel The Last Letters of Jacopo Ortis (1798). 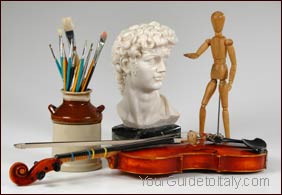 YourGuideToItaly.com
your independent guide to Italy and the Italian way of life