Marco Polo was a Venetian trader and explorer who set off for the east as a youth with his father and uncle in 1271 and stayed at the court of the Mongol Kublai Khan (grandson of Genghis Khan). He returned after 24 years to find Venice at war with Genoa; Marco was imprisoned, and dictated his stories to his cell mate.

Merchants and missionaries were the only people traveling from Europe to Asia, but Marco Polo was certainly the only one who remained in Asia for such an extended period of time.

Christopher Columbus (in Italian: Cristoforo Colombo) was an Italian navigator and explorer and one of the first Europeans to explore the Americas after the Vikings. The best available documentation suggest Christopher Columbus was born in Genoa to a weaver. However, theories exists suggesting that Columbus may have been Catalan or Portugese.

Christopher Columbus unintentionally discovered the New World while sailing west to get to the east  in search of a direct sea route to the lands that Marco Polo reached in his overland travels to China at the end of the 13th century. In four consecutive travels to the Caribbean from 1492 to 1504, Columbus remained convinced that he had reached the Indies, and so he named the people "Indians." 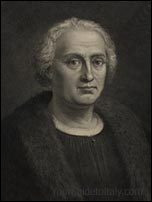 However, other contemporary adventurers, such as the Florentine explorer Amerigo Vespucci, after whom the Americas are named, believed that this land was a new world totally unknown to the ancients. 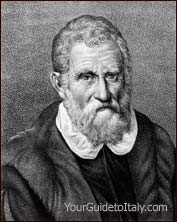 Polo's background in business and his love for nature made him very observant of humans, animals, and plants. His vivid and well-documented descriptions of his extensive travels throughout Asia on behalf of the Khan,  through Acre, into China and to the Mongol court, covering 15,000 miles (24,140 km) and 24 years of adventures, also inspired other explorers, such as Columbus.

Marco Polo's book Il Milione is know in English as "The Travels of Marco Polo". It was translated, embellished, copied by hand and adapted; there is no authoritative version. Several conflicting translations exist of the original manuscript which is lost.

Legend has it that Polo dictated the book to a cellmate, a romance writer, Rustichello da Pisa, while in prison in Genoa between 1298 -1299, which may explain why the oldest surviving Polo manuscript is in Old French, a language unknown to Polo. 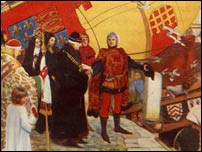 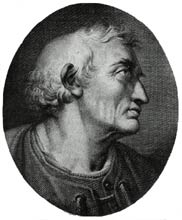 Giovanni Caboto (known in English as John Caboto) was a Venetian navigator and explorer and known as one of the five Italian navigators of the era of the great geographical discoveries. He sailed in the name of the English crown and his discovery gave England  its first claim of overseas territories after Christopher Columbus had discovered America for the Spanish crown. Sailing west after embarking at Bristol in May 1497, Cabot sighted land on 24 June. This was probably Newfoundland but also possibly Cape Breton Island.

His place of birth remains uncertain, but by 1461 Cabot was living in Venice, where he became a citizen. He married a Venetian woman, Mattea, in 1482 and they had three sons: Ludovico, Sebastiano and Sancio.

Detail from a painting
by Ernest Board, 1906 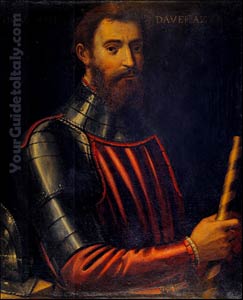 He was sent on a mission by Pope Innocentius the IV to the Great Khan Guyuk (son of Ogadei) of the Mongol Empire. He left from Lyon in April 1245 and returned in 1247 at over 60 years of age.

His Historia Mongalorum was the earliest important Western work on northern and central Asia, and other regions of the "Tatars Land" or Tartaria, as he called it. It is one of the most detailed and unbiased accounts we have of the Mongols in the thirteenth century.

Pietro di Brazza, known as Pierre Savorgnan de Brazza was an Italian-born explorer, who is famous for having added an area three times the size of France to the French empire in Africa.

His father, Count Ascanio Savorgnan di Brazzà was a nobleman of Udine with many French connections. Pietro grew up in Rome, then entered the French naval academy in 1870. He adopted French citizenship and officially changed his name at the age of 21.

With the backing of the Société de Géographique de Paris, Pietro Savorgnan opened up an entry along the right bank of the Congo that eventually led to French colonies in Central Africa.

Under French colonial rule, Brazzaville, the capital of the Republic of the Congo, was named in his honor. Brazzaville is one of the few African cities to retain its colonial name, out of respect for "the peaceful conqueror." 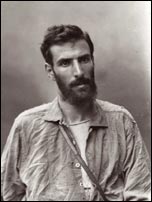 Giovanni da Verrazzano was an Italian explorer in the service of the French crown. He was sent by King Francis I of France to explore the Atlantic coast between South Carolina and Newfoundland for a route to the Pacific Ocean and in 1524. The Verrazano-Narrows Bridge in New York Harbor and Jamestown-Verrazano Bridge  in Narragansett Bay are named in his honor.


YourGuideToItaly.com
your guide to discovering Italy bit by bite

The most reliable sources (by his son Ferdinand and contemporaries) describe him as having either blond or red hair, but which turned white at an early age. He had a fair complexion, blue eyes and an aquiline nose. The fact that his hair was described as being blond by one reliable source and red by most others is not necessarily contradictory; his hair was probably of such an intermediate color that could be considered as blond by some or more reddish by others (much like the color turquoise can be called a type of green and a type of blue) depending on their cultural background.

We have choosen the portrait on the left for its concordance with the most reliable physical descriptions and for its ressemblance with a
composite portrait produced from all major portraits using morphing technology, from The Face of Christopher Columbus?
Using Morphing Technology to Arrive at a Composite Portrait  by Paul Martin Lester, originally published in Visual Anthropology, Vol. 7, pp. 97-98

The most popular portrait is a painting attributed to the artist Sebastiano del Piombo. However, no consensus exists among experts; the portrait may not have been painted by

Since no portraits were made during the lifetime of Columbus, numerous theories and post-hume portraits have tried to give a realistic picture of what Christopher Columbus looked like.

Piombo, and more importantly, there is reasonable doubt that the person represented is actually Columbus. The signature and legend may have been added at a later stage to increase the value of the painting. Also, it is one of the only portraits that represents Columbus with a hat.

ATo the Ends of the Earth: The Age of the European Explorers
by Peter O. Koch
More information:

Marco Polo's Silk Road:
The Art of the Journey - An Italian at the Court of Kublai Khan
(The Art of Wisdom)
by Watkins (editor)
More information:

How Florence Invented America: Vespucci, Verrazzano, & Mazzei and Their Contribution to the Conception of the New World
by giancarlo Masini and Iacopo Gori
More information:

The New Man and the New World: The Influence of Renaissance Humanism on the Explorers of the Italian Era of Discovery
by Richard di Giacomo
More information: 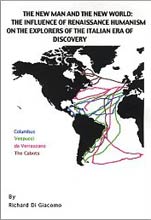