Ferrari:
the History of an Italian Icon 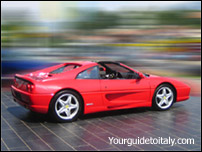 Ferraris are probably one of Italy's most recognizable symbols, synomous of wealth and status everywhere in the world. Their history starts with Enzo Ferrari, the company's founder, known as "the Drake". Although he started as a racing pilot - his true passion in life -and won nine titles, he became more renowned as the inventor of one of the most fascinating sports cars of all times.

It all started on November 1929, when Enzo Ferrari, then aged 31, founded the "Scudiera Ferrari" at Modena. At first the Scuderia merely prepared Alfa Romeo sports cars for competition in official racings. As the "Scuderia Ferrari" was pretty successful Alfa Romeo decided to appoint Enzo as General Manager of its racing division (Alfa Corse). However, Enzo soon decided to start building his own racing cars and created his company: Auto Avio Costruzioni.

Origin of the Red-colored Racing Car

At first Auto Avio mainly produced industry oleodynamic equipment, while the design and production of sports cars was merely a side activity. Then Ferrari moved his factory to Maranello, which is still the official company headquarter today. In 1944 Ferrari rebuild the plant, which had been bombed during WWII and abandoned the production of industrial machinery to concentrate solely on the building of sports cars.

As Italy's national racing color was red, Ferraris were painted in red (rosso corsa). In the same way, for French cars the racing color was blue, for British cars green and for German ones white.

Enzo Ferrari realized he needed more funds to support his racing business and began making commercial sports cars. In the same years (1951) Ferrari entered a partnership with Carrozzeria Scaglietti in Modena where all main frames of his new cars were to be designed and built. It is still the case today, even if Carrozzeria Scaglietti was absorbed by Ferrari in the mean-time. 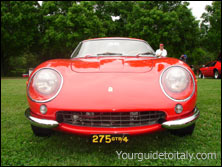 Origin of the Ferrari Logo

The idea for the famous Ferrari horse logo was submitted in a letter to Enzo Ferrari by his friend Countess Paolina, whose son, Count Franceso Baracca, was an ace of the Italian air force. As her heroic son had a horse painted on the side of his planes, Countess Paolina suggested that Ferrari applied the same horse to his cars to assure him of the same success. The horse emblem was slightly adapted and painted in black on a yellow background (the official color of Modena). 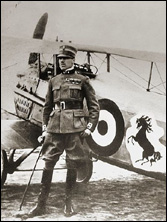 Count Francesco Baracca with the original horse logo on his plane

In the 1960's Ferrari recognized the need for a strong partner to get additional funds for his research. A new partnership would also allow him to scale up production in a profitable way.

Enzo Ferrari was known for his eccentricities, but also for being a visionary. In 1972 he built the circuit of Fiorano, near Maranello, where his pilot and chief mechanics could test the cars simulating real race conditions. Very few car companies of that time had made the visionary move to include a real racing circuit where to test cars. 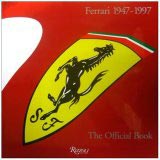 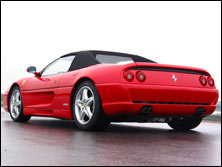 Living, Studying, and Working in Italy:
Everything You Need to Know to Live La Dolce Vita
by Monica Larner

YourGuideToItaly.com
your independent guide to Italy and the Italian way of life 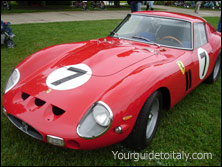 Ferrari had always  been very upfront about the fact that he only produced commercial cars to fund his racing business and kept his commercial customers in contempt. Ironically, his cars became famous as a status symbol, more than for performance.

After the death of Dino (at that time Enzo's only known son), Enzo recognized his other son Piero, born from an illegitimate relationship, as his son and heir.

After the founder's death in 1988, Fiat increased their stake by another 40% making their stake in the company 90%. Today, Piero Ferrari owns 10% of the company and is Vice President of Ferrari. 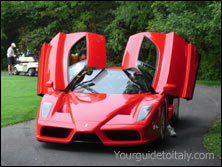 In 1969, Ferrari sold additional shares increasing Fiat's stake to 50%. Ferrari stayed on as managing director until the early 70's and as Genearl Maganer of the racing team until his death. 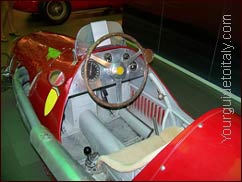 After a first contact with Ford, Ferrari drastically changed his mind and dropped the American option at the last minute to enter a partnership with Gianni Agnelli's Fiat in 1965. 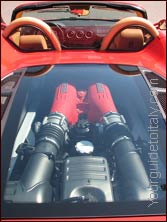 Ferrari:
A Complete Guide to All Models
by Leonardo Acerbi
A complete guide covering more than 50 years of Ferrari models, from Prancing Horse cars from 1940 - the year of the 815 Auto Avio Costruzioni - to the 2006 F1 racer of World Champion Michael Schumacher and all the great production cars in between.
Organized in chronological order and sub-divided into grand touring, Sport cars, and Formula One single-seaters,
More than 180 designs are beautifully illustrated with both artworks and photographs
More information >>