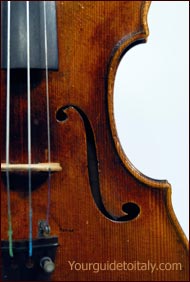 Italian violins represent to many people the archetype of lutherie. The oldest surviving violin, the best violin of all times and the most famous violin are all of Italian making.

To this day, the most sought-after instruments by both collectors and performers are those made by the Italians Stradivari and Guarneri del Gesu, both luthiers from the "Golden Age" of violin making.

The two most important and by far most famous schools of Italian violin makers, or luthiers, are the Cremona school and the Brescian school. Other important violin making centers in Italy include Naples, Milan, Venice and Mantua.

Gasparo Bertolotti (1540 - 1609) known as Gasparo da Salò is considered the founder of the Brescian school of violin makers. His father Francesco Bertolotti (1513 - 1563) and uncle Agostino Bertolotti (1510 - 1584) were renowned violin players and composers.

One of da Salo's violins created in 1574 c. is considered one of the best violins of all times. It is known for the astonishing power and remarkable sound. It was first owned by Ferdinand II, Archduke of Austria and from 1841 by Ole Bull one of the most outstanding virtuoso of the world.

Guarnerius is the Latinized form of the family name and Joseph the Hebrew form of Giuseppe. "del Gesu" was added to the name because he signed his labels with a cross and the letters IHS, the Greek abbreviation for Jesus (IHS).

Guarnerius del Gesu was by far the most illustrious violon-maker of the family, regarded as second only to the great Italian violin maker Antonio Stradivari. Many soloists prefer his violins to those of Stradivari due to their dark tone and greater power. The estimate of his total production is not more than 250 violins, of which only 150 violins are known to exist.


- Francesco Ruggieri (1620-c. 1695). He was the first and greatest of a Cremonese family of violin makers, although he is not traditionally considered part of the Cremona school. It is not sure whether he was a pupil of Nicolo Amati or merely made violins in the style of Amati, but the two families were linked, as Amati was Godfather to one of Ruggieri's sons. However, Ruggieri originally came from the suburbs of Cremona and never received the same aura and recognition as Amati and the Cremona school during his lifetime. Yest today, his violons are rated as highly as those of Amati. They were produced from 1655 to 1718 and have a rich, full tone. His name appears in various forms on the labels, Ruggeri, Ruggerius, Rugier, Regeri, Ruger.

- Amati family, founder of the Cremonese school of violin-making:
Andrea Amati (1500-1577), laid the basis modern violin-making. His grandson Niccolo had Antonio Stradivari as a pupil.

His production does not exceed 24 violins, of which few have survived. The oldest confirmed surviving violin in the world, the "Charles IX", was made by him in 1564.

Niccolo Amati (1596-1684): grandson of Andrea Amati. He produced some of the most beautiful violins ever made and is regarded as the best luthier of the family. His violins have a sweet, mellow sound.

- Antonio Stradivari (1644-1737) of Cremona, brought the violin to its highest level of perfection. He produced about 500 violins. However, the best Stradivari violins were made between 1700 and the 1720s. The violins of this period render a broader, richer sound, while those of the earlier period produce a sound similar to that of the Amati violins and those of the last period (1730s) produce a deeper, darker voice. Each of his instruments has its own voice, but there is 'genetic resemblance' between all his violins, in part due to a special, preservative varnish used.

The most famous, and certainly the most pristine violin, the "Le Messie" (also known as the 'Salabue'), was made in 1716, and never used. It is now located in the Ashmolean Museum of Oxford. The abbreviation "Strad" is often used to refer to his instruments. 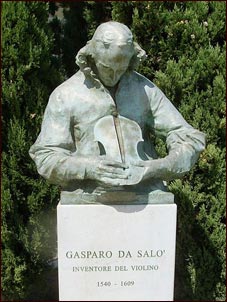 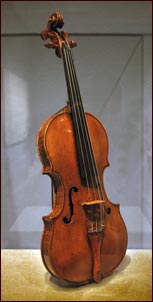 Andrea Amati violin (ca. 1558), MET New York
One of the world's oldest still surviving violins. It is also one of the first ones with four strings (previous violins often only had 3 strings).

Violin by Giuseppe Guarneri 'del Gesu' that belonged to Niccolo Paganini (1782 - 1840). It was Paganini's favorite violin, which he called il mio cannone violino, hence the name of the violin il Cannone (The Cannone). In his will Paganini left his violin to the city of Genoa, where it is kept now at Palazzo Tursi, the town's city hall. The violin is periodically played by the violonist Mario Trabucco and by the winner of the International Violin Competition Premio Paganini on October 12 each year at the occasion of the Columbus celebrations. 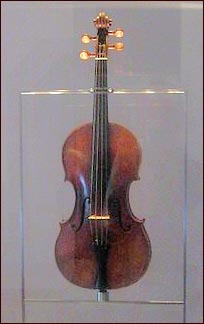 - Bergonzi family of Cremona, of which the most illustrious member was Carlo (1683-1747), a pupil of Antonio Stradivari. Though not as refined, his instruments are greatly esteemed and often compared to those of his masters, Guarneri and Stradivari.

- Alessandro Gagliano (active from c. 1700 to c. 1735), is considered the founder of the Neapolitan school of violin making. He was a pupil of Nicolo Amati and Antonio Stradivari and founded his own shop in Naples after returning from Cremona. His violins are said to be very mellow on the G and D strings and silvery on the two top strings. Several of his violins have survived, but instruments in good condition are scarce.

Domenico Montagnana (1786 - 1850), is regarded as one of the finest violin and cello makers of his time. His cellos, in particular, are extremely sought after by musicians, museums and collectors.

Other luthiers of the Venetian school include Giovanni Battista Guadagnini (1711-1786), Sanctus Seraphin and Carlo Annibale Tononi. 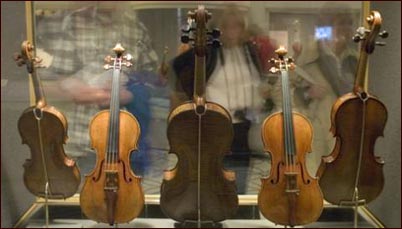