Train travel is certainly the most convenient and relaxing way to get around Italy, especially if you want to avoid driving while figuring out road directions, lining up to pay highway tolls, and parking in Italy's big cities.

A Regional Rail Pass, such as a Eurail France & Italy Pass, Eurail Greece & Italy Pass or Eurail Italy & Spain Pass is perfect for travel itineraries that include these popular country combinations.

For visitors who would like to explore multiple countries including Italy, count on the Eurail Global Pass, providing rail travel throughout 21 countries, or the Eurail Select Pass for travel in your choice of 3, 4 or 5 bordering countries.

If your focus falls on beautiful Italy with no other distractions, then the Eurail Italy Pass will surely give you the time to discover all its vibrant cities with validities from 3 to 10 rail travel days within 2 months.

As the Eurail product range is only available to international travelers, European residents can also enjoy an Italy rail pass by selecting either an InterRail Global Pass or InterRail Italy Pass.

Please also note that rail pass and ticket holders are required to pay a supplement for high speed trains and seat or sleeper reservations. All of these pass can be found at most Eurail distributors.

Two of Italy's trains, Frecciarossa and Frecciargento, will surely impress travelers with their superior catering services and high speed service featuring multiple daily departures and connections to popular city centers. Frecciarossa trains connect Turin to Salerno via Milan, Bologna, Rome and Naples with speeds up to 360 km/h. In fact this train boasts 72 daily connections from Milan to Rome, some non-stop, delivering passengers in less than three hours. Other popular routes, also with numerous daily connections, include Milan to Naples, Turin to Rome, Bologna to Florence and Rome to Naples.

Many Italy rail passes offer pass holder benefits including discounted ferry crossings and more. For example, a Eurail Pass valid in Italy and Greece or an InterRail Global Pass provides free passage on Superfast Ferries on select routes, and a Eurail or InterRail Pass valid in Italy or Greece offers a 30% discount on these same routes. As Superfast Ferries offer great value for crossing the Adriatic Sea to Greece, it's also a great compliment to any Italian point to point rail ticket. 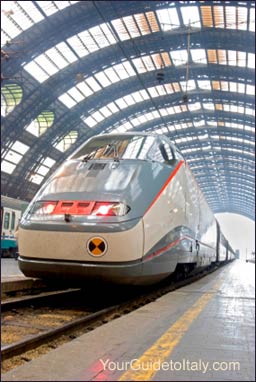 Trenitalia trains cover Italy's rail network spanning over 16,000 km, with an excellent range of services from high speed trains, to Intercity services, to International routes. An Italy rail pass allows visitors to easily access trains throughout Italy, while enjoying the high level of comfort, service and flexibility Italian train travel has to offer.

About the author:
Angela Guezen is a travel professional who has explored the likes of Australia, Japan, and Europe. With a love for beautiful landscapes she has great appreciation for train travel and shares this passion with fellow travelers by writing for www.ACPRail.com and www.BritRail.com.