Ferragosto is an Italian holiday celebrated on August 15. It is the most important summer holiday in Italy, and the second most important holiday time after Christmas. Most Italians will get out of the cities and head for either the beach or the mountains. 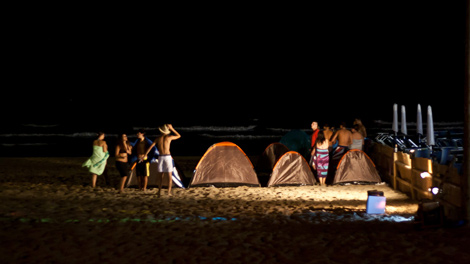 The Italian 15th August Since the Ancient Rome
by: Lia Contesso

The mid-August holiday is an ancient feast, that already existed in Octavian Augustus' times; later, it coincided with the Christian celebration of the Assumption of the Virgin Mary.

In 18 B.C. the emperor Octavian Augustus instituted the mid-August feast to connect the celebrations of the month, thus creating a necessary and deserved period of rest after the fatiguing period of the harvest - other than for a kind of political self-promotion. During the "feriae Augusti" the draught animals were exempted from their work and dressed up with flowers decorations, while the workers brought their wishes to their chiefs, from whom they received extra tips. It's easy to imagine how these days were longed for in the whole empire: nowadays, anyway, the mid-August feast is a typically Italian celebration, to which the population of the boot is very attached, differently from the other nations.

Spending some days in Cassino, the 14th August you can see the Crowning of the Virgin Mary: following the tradition, the statues of Our Lady and of the Child Jesus meet in Via Foro, where once, a long time ago, the statues met and the plague suddenly disappeared. Hence, the statues are still brought in procession in that precise point, and after they meet the Abbot crowns that of the Virgin Mary, queen and mother of Cassino.

On the 15th August, instead, Cassino celebrates the Assumption feast; the religious ritual, in the Annunziata Church, is followed by a series of celebrations organized by the municipality and by the citizens, ready to welcome all the people who wish to celebrate the laic and Catholic feasts, following millenary traditions. 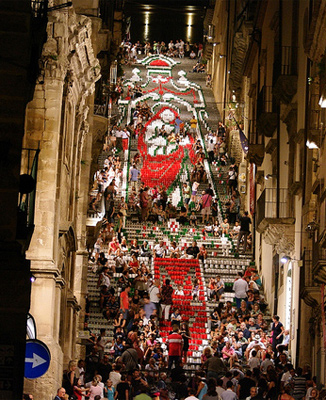 .
.
With the arrival of the Christianity, then, the 15th August took on a new significance: in that date, in fact, the Christian religion celebrates the Assumption of the Virgin Mary in the skies that, according to the Catholic dogma defined by Pope Pius XII on the 1st November 1950, would have ascended in the skies not only with her soul but with her whole body. The Assumption of the Virgin Mary is also called Dormition: some theological currents, in fact, sustain that Mary would not have died, but she would have fallen asleep, and would have ascended while sleeping. Death, in fact, for the Catholic religion is connected with the original sin, and being the Virgin Mary pure and with no sin since her conception, there would be no reason for the death to end her terrain existence. In fact, the dogma proclaimed by Pope Pius XII does not clearly establish whether f the Virgin Mary has died or not: it affirms that she has been welcomed in the skies once her terrain existence was over, without specifying the reasons of the end of her terrain life, on which different opinions has formed.

The celebrations for the Assumption of the Virgin Mary, nowadays, almost get confused with those of the mid-August, that in its laic sense remains a wholly Italian feast: hence, the 15th August in the Italian boot assumes a sacred and laic importance, and it's a feast to which the whole peninsula is extremely attached, differently from the other countries, in which it has not the same consideration. From the famous Palio di Siena to the processions made in the whole Italy, followed by parties and nights in the beach, Italy celebrates and gives the 15th August a fundamental role in the summer holidays planning.

About The Author
By Lia Contesso with support from Mont Cassino for any information, please visit Cassino in Italy or for more info visit conference hotel Cassino. The author invites you to visit: http://www.hotelrocca.it

Photo credits: Ferragosto night at Circeo by 'Nicola since 1972; Caltagirone by Edgar Poe.

Ferragosto in Caltagirone, Sicily with the Scala Illuminata, the Light Festival on the stairs of Santa Maria del Monte.